Hosted by @Aelin, and looking for a co-host!

Dungeon Master is a turn-based proxy fighter royale… or something.

The Map starts out as a 4x4 grid, which will be turned into a 3x3 grid at 9 players, then a 2x2 grid at 4 players. Each player will spawn in a different grid with a preset loot pool. 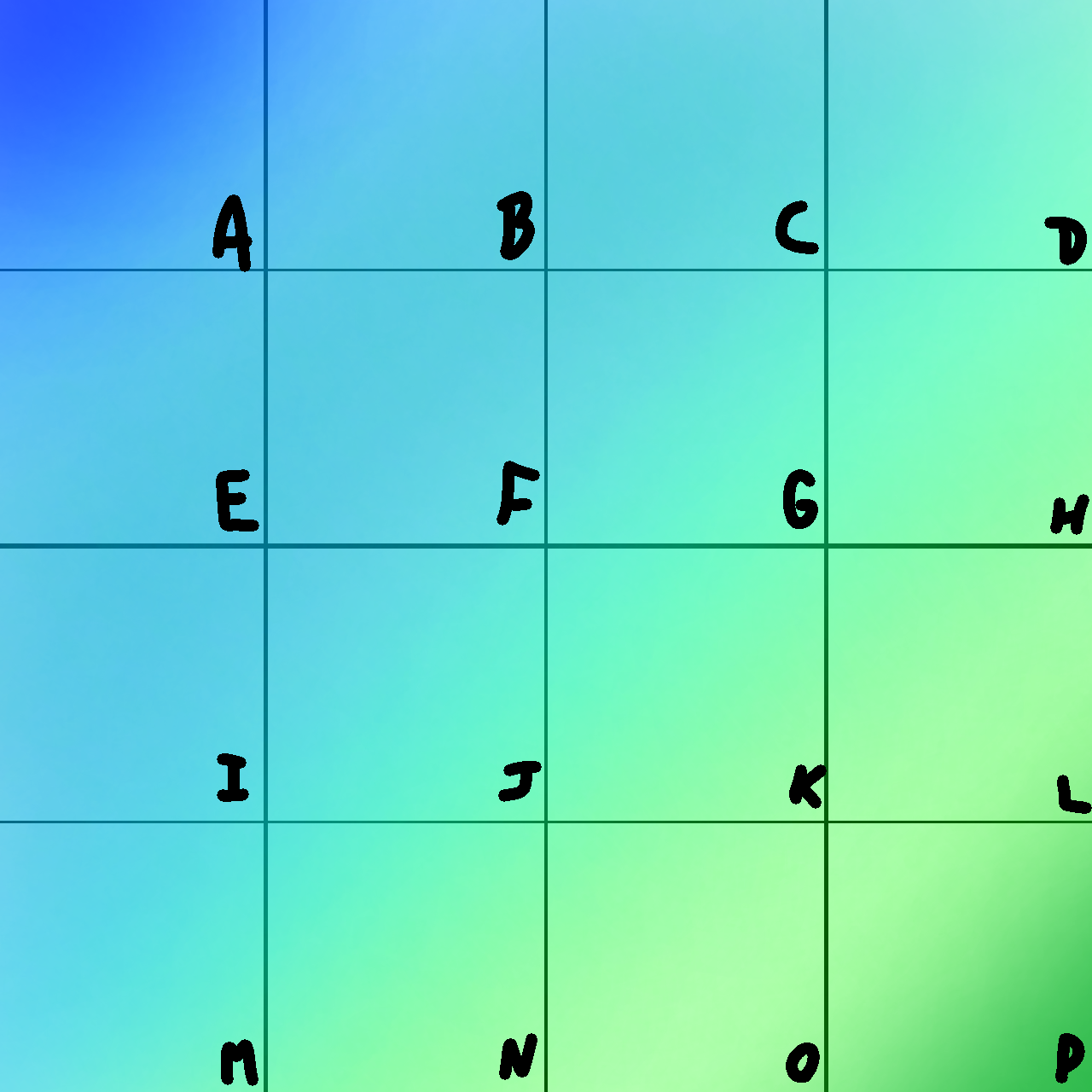 Each round, you may choose to move 1 tile in any direction, including diagonally. You may also choose to stay in your current grid for another go at your loot pool. Every round, player locations will be shown on the map.

ALL ACTIONS CAN BE LOCKED AND WOULD BE MASSIVELY APPRECIATED BY THE HOST IN ORDER TO IMPROVE PROCESSING SPEED.

After you move to your tile, you will have a chance to loot your tile. There are four different types of items; Physical, Magical, Defensive, and Support, as well as four different tiers; Common, Uncommon, Rare, and Legendary. You will be able to submit three looting actions by default.

The center squares of the 4x4 and 3x3 maps will have higher tiered loot than the outskirts on average, while the corners will have the lowest tiered loot.

Rooms will be made if there is more than a single player on a tile in order for the tile to chat. There will also be a main thread active at all times.

Each character can equip 2 of any combination of Physical, Magical, and Support items, and 1 Defensive Item.

Players will then submit 4 rounds of actions, or a ‘set’, for each character they pick. Character affinities will multiply their respective items’ effects by 1.25x. This stacks additively with strengths rather than multiplicatively.**

If there is only a single player on a tile, instead of a battle phase, they will instead be able to loot a single extra item.

**This means that a Gladiator with a Physical weapon would do 1.5x damage to a Mage rather than 1.5625x damage, for example.

There are four types of actions; Attack, Heal, Support, and Evade. Only Healers can Heal. Gladiators can not choose to Support. For each type of Attack action, you must also submit a preference list of what type of character you would like to attack. Evasion will halve the damage you receive from a turn.

For example, a set from a Gladiator could look like:

Critical Hits are achieved when you roll the highest number for your base attack (10 for Gladiators, 8 for Rogues, 5 for Mages, and 10 for Healers), and do double the damage.

For example, a Mage attack against a Rogue could look like:

This would do 20 damage against a Rogue.
Numbers will be rounded to the nearest whole number.

Only Healers have access to the Heal move. This Healing will be done based on a 1d20, and can go above the original health cap up to 150%, and then item bonuses will be accounted for. Healers can heal either themselves or their partner.

Health stats will be updated at the end of a turn based on the cumulative health total. So, if a Rogue with 10 health takes 15 damage, but is then healed for 20, they will survive with 15 health.

It is up to the players whether they want to have this be hosted on Forums or on Discord. Both options have pros and cons for me, but will probably not effect gameplay.

Whenever a Champion ends a turn with less than 1 Health, they will die. A player loses and is out of the game when all 4 of their Champions die.

In the event that no players die within, like, a reasonable amount of turns due to intentional avoidance, the host reserves the right to just fucking nuke people lol

If this is confusing to you, think of it as Whysper’s Forum Battle Royale but unnecessarily confusing and with Champions instead of direct battling.

i run around stab people

that is my whole game plan

how do you win

that is how not dying works, yes

wait atlas when did you become funny

if everyone just makes a truce we all win

no you just dont lose

the game shall go on forever

and maybe ill just start dropping bombs or something idk