Whenever you report a player at the end of a game, it goes straight into our report queue for moderation. We can automatically detect how high of a priority the report based on numerous aspects, one especially being report history and patterns of behavior that we can now detect automatically to bump/adjust these priority levels. This information we have access to can be found within our privacy policy.

See our 2-years of moderation stats/analysis:

We can easily judge the “chances” that the player is a troll before we even see the report:

Although we don’t use this information, alone, to issue disciplinary action – it definitely helps display likelyhood.

We also note your reported-to-games-played ratio. Even after salt reports, the average % is between 1~2%.

All reports are 100% human reviewed before a disciplinary action is issued. We use a laddered escalation system of volunteers to help aid the human reviews of reports, all hand-chosen by í42 staff:

Although is the general scale, repeated offenses from the same category and severity can skip tiers, especially if done intentionally.

When a Guide+ reviews reports to make a verdict, this is what it looks like: 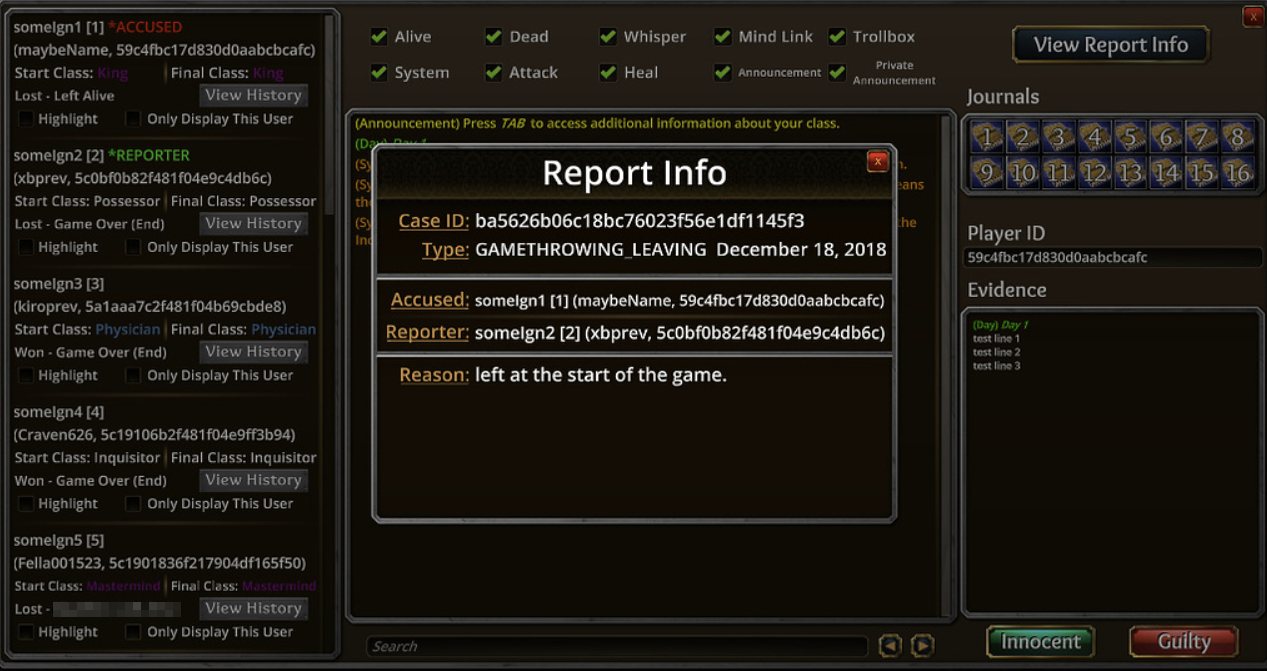 We have a huge array of logs, filters, report/action history, match info (including the real trollbox authors, whispers, logs), and more.

If the user received a suggestion from a Guide, we post progress and summary in a secret Discord channel with restricted access so that other volunteers may see progress + so that we can quickly act on those, manually, if need. Reports by Judges+ prioritize already-suggested actions to swiftly assist in serving out a verdict. Guides+ see this:

If the user receives a suspension by a Judge+, we also provide proof of action within the Discord #justice channel so players know their reports are meaningful (Warning: This channel sometimes contains NSFW evidence):

As of patch v2.1.1, there is now a higher-tier of Guide called Report Squad, a Discord-exclusive role. Discord roles now sync in-game and may offer +gp incentives to Report Squad members and Judges.

*Note that innocent cases reward just as much gold as guilty cases: If corruption were to occur, these folks would more likely “inno” cases rather than guilty due to the sheer amount of time saved.

In order to obtain Report Squad, a Guide must continuously prove worthy of the promotion after numerous report resolutions that were both accurate and just (as deemed by the Mod+ team).

We have alt detection: If a suspended player tries to bypass this, they will receive a 30d ban on the evasion account (which will extend to the main account) and be flagged for having a banned alt.

We have 24/7 support on our Discord for really bad “fix it now” cases. For this, players may ping a @moderator or @Judge to deal with the action. While reports at the end of the game give us the whole story, sometimes a screenshot will suffice.

Judges+ have access to quick, Discord actions of in-game moderation.

What happens to fake/salt reports?

They backfire. Disciplinary action will take a hit on the reporter, instead, if intentional. We’ll know~

Want to become a Guide+?

Simply participate in our community, help others instead of troll, and be active in our Discord (especially in #ask-a-guide). There is no formal application – we’ll come to you with an invite

Someone sure loves cheese. (check the Imgur links if confused)

This is very interesting to look at. It also seems pretty good. Good job!

It seems better than last report system.Keep up the good job.

Ur better than last report system

By the way,is it possible to reveal something like unseen members in logs when dead,then change em while dead and “fool” the report system’s abillity to view old logs?

By the way,is it possible to reveal something like unseen members in logs when dead,then change em while dead and “fool” the report system’s abillity to view old logs?

I’m sure they have a way to check the history of logs. If not, willing to bet your “logs when dead” are logged.

PS: Your avatar of Missile is too cute

Don’t let me use my mirror reflection.

Whoa! They are going really transparent with all these. I don’t see a single thing I can’t remember.(ex-Guide) The developers are going all out, so do give them a thumbs up!

Just to let the devs know: This transparency won’t go unnoticed. This is a good practice in my opinion and I think you guys will be able to weed out toxicism with this. Keep it up!

So I decided to search up the image of Suspension and Warning… and I got this:

In the Discord, The Banhammer should say

“Someone just received an in-game suspension after being reviewed, following a player report” or something.

This one is even less right though

We don’t review players, we review the reports.

Something like “Someone just received an in-game suspension after a report was reviewed” would kinda make more sense, even though the current one is fine imo

Update: Starting next patch, 1-year bans will now become “permabans” (10 years) after studying the recent 1-year ban folks returning, to only find the greater majority get banned again on the same day of returning.

If one year bans were the old “permaban”

And ten-year bans are the new permaban

Forum and community bans are PERMANENT perma. This semi-private community is a privilege, but in game is purchased with money (usually), and so we are more lenient there (since it becomes a bit awkward to ban someone from our service if they paid for the game).